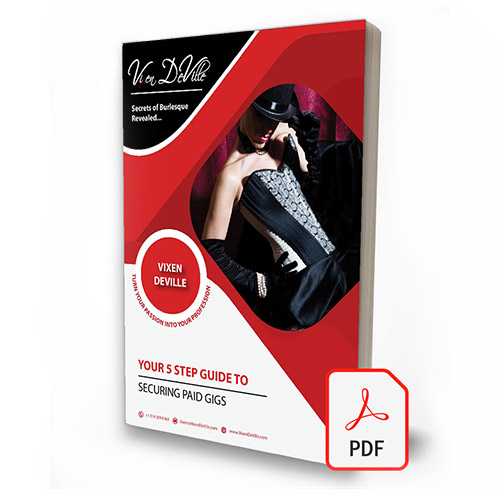 How to MAKE MONEY as a Burlesque Performer today!

What this Step-By-Step Guide will teach you:

How to build your presence in this industry and become a stage performer.

The Four Most Important Tips:

► How to use social media to be remembered for the RIGHT reasons.
► How to create professional submission materials that reduce your ‘risk-factor’ and get you booked.
► The secrets to by-passing submissions and auditions.
► The secrets to securing those Higher Paid gigs. 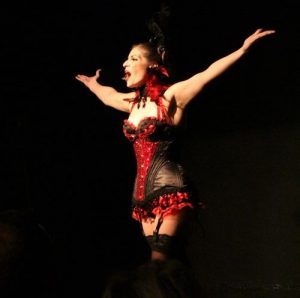 WHAT PEOPLE ARE SAYING

“Vixen is an amazingly supportive, inspiring and dynamic coach! I used to be really heavy and didn’t feel connected to my new, thinner body. I also believed I couldn’t dance my entire life, which made me even more self-conscious. I went from having a panic attack the first class, to performing my act on stage like a pro 10 weeks later. It was the most fun I’ve ever had in my life! I now feel sexy, confident and strong. This class was a truly transformative experience! Don’t think about it, just do it”

“Vixen is a charming, talented, experienced, and superb instructor. Her personable instruction and easygoing, approachable attitude made the learning process a breeze. It was especially great to be introduced to burlesque through Vixen, because I was pretty intimidated and nervous to begin and after the course, I felt prepared and confident.”

“Vixen DeVille is equal parts sexy, seductive, mysterious, quirky, goofy, and even awkward, and she pulls it off like it’s the easiest thing in the world. I wanted to learn from her! I was able to learn insight into the burlesque world, something I had NO previous experience in. With her help and guidance, I auditioned and became part of the Dollface Dames burlesque troupe in LA. I am not easily impressed by people, but Vixen was so good at what she did (and was so fun a person to be around) that she made it hard NOT to be wow-ed by her. I think comedian Steve Martin said it best – “Be so good they can’t ignore you!” TAKE CLASSES WITH VIXEN. DO IT.”

“I am now an international title-holding burlesque performer. The confidence and the skills I picked up from this class helped me win this title. A big thank you is owed to Vixen. Thank you for creating this wonderful thing that gave me the opportunity to grow. I have this trophy because of your help.”

Starting her career in London, England with appearances at Cafe De Paris, The Ritz Hotel and three West End runs at The Charing Cross Theatre,she has since relocated to Los Angeles. She performs regularly around town at The Viper Room, LA Convention Center, The Roosevelt Hotel, as well as venturing out to The Orleans Casino and Hotel in Las Vegas. She’s had the honor of performing private events for, ‘The Simpsons’ and Neil Patrick Harris.

From classy to comedic, from glamorous to gory, Vixen DeVille is guaranteed to charismatically perform a theatrically spectacular act perfect for your show or event. With an array of stunning costumes and numerous specialty skills to hand, Vixen can offer you a tried and tested signature piece, or create a custom-designed act specifically for you and your theme.

In addition to performing for audiences, Vixen also teaches her craft both privately 1-on-1 and in supportive group workshop environments. She is a one-stop-shop for anyone interested in the world of Burlesque, with classes ranging from “Introduction to Burlesque & Body Confidence” to full “Solo Act Development” as well supplementary classes covering “Costume Crafting” and a range of specialty performance skills including Fire Performance, Aerial and more.